A Classic Of Expressionist Cinema

The Cabinet of Dr. Caligari is really the first true horror film. The plot is a narration of the main character, Francis, as he recounts the sordid happenings of a town fair. As a part of the fair, Dr. Caligari brings his exhibit: Cesare the somnambulist. The ensuing horror is tame by any contemporary standards, but its effect is hard hitting and no less shocking than any other modern horror scene.

In 1920, The Cabinet of Doctor Caligari was instantly recognised as ground breaking and 95 years later it’s power hasn’t waned. It is the pinnacle of German Expressionism, a visual joy and an enchanting story. It still seeps off the screen and continues to influence our world. Created as a response to the boring and bland cinema of the day, now, as before, this film can be viewed as it was meant to be, still standing strong against empty special effects laden atrocities that insult us around every bend. Part of the fun in watching Caligari is picking out all the little moments other directors borrowed and laid tribute to – a luxury only time could allow us. 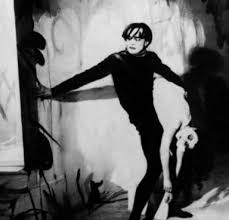