In late February 1920, a film premiered in Berlin that was instantly recognized as something new in cinema: The Cabinet of Dr. Caligari, directed by Robert Wiene. Its novelty captured the public imagination, and it was a considerable success. The film used stylized sets, with strange, distorted buildings painted on canvas backdrops and flats in a theatrical manner. The actors made no attempt at realistic performance; instead, they exhibited jerky or dancelike movements. Critics announced that the Expressionist style, by then well established in most other arts, had made its way into the cinema, and they debated the benefits of this new development for film art.

In painting, Expressionism was fostered primarily by two groups. Die Brucke (The Bridge) was formed in 1906; its members included Ernst Ludwig Kirchner and Erich Heckel. Later, in 1911, Der Blaue Reiter (The Blue Rider), was founded; among its supporters were Franz Marc and Wassili Kandinsky. Although these and other Expressionist artists had distinctive individual styles, they shared some traits. Expressionist painting avoided the subtle shadings and colors that gave realistic paintings their sense of volume and depth. Instead, the Expressionists often used large shapes of bright, unrealistic colors with dark, cartoonlike outlines. Figures might be elongated; faces wore grotesque, anguished expressions and might be livid green. Buildings might sag or lean, with the ground tilted up steeply in defiance of traditional perspective. Such distortions were difficult for films shot on location, but Caligari showed how studio-built sets could approximate the stylization of Expressionist painting.

While German Expressionism in the film industry was short-lived, the themes were brought to American film when the Nazis gained power and German filmmakers immigrated to Hollywood. Expressionism influenced other genres such as horror and film noir, which set the style and mood of the Universal monster movies of the 1930’s. The visual style and story world of German Expressionism continued to influence many great directors, from the films of Alfred Hitchcock to contemporary director Tim Burton. 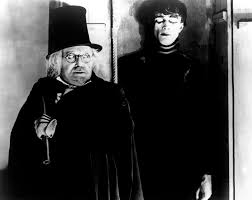