The African Queen is one of those movies that shouldn’t work, but does. Set in German east Africa, it’s the unlikely story of a starched English missionary (Hepburn) and an unsanitary, gin-swilling boat captain (Bogart), who embark on a self-imposed downriver mission to do their bit in the first world war. There are rapids, Germans, breakdowns and hungry leeches to negotiate, but it’s less an action thriller than an eccentric opposites-attract romance, fuelled by the unexpected chemistry between its middle-aged leads.

In 1951, Hollywood directors rarely strayed beyond the studio lot, but John Huston had already made The Treasure of the Sierra Madre in Mexico, and insisted on shooting The African Queen in Africa – in what was then the Belgian Congo and Uganda. What a surreal congregation it must have been: Humphrey Bogart, Huston’s drinking buddy and regular leading man; Bogart’s young wife Lauren Bacall, who decided to come along for the ride; Katharine Hepburn, unpopular at the box office and at a crucial stage in her career; and a crew of British technicians, including cinematographer Jack Cardiff and future Bond director Guy Hamilton. Then there was Huston himself: man of action, war veteran and incurable adventurer. 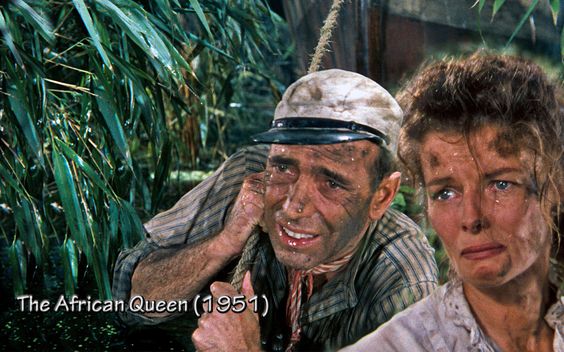