It is perhaps the most reproduced, recycled and ripped off image of the 20th Century.

On October 8 1967 the Argentine-born Marxist revolutionary Ernesto «Che» Guevara was arrested in the Bolivian jungle. The following day he was summarily executed and his body was buried underneath a landing strip. It was recovered in 1997 and returned to Cuba, where he was reburied with full military honours.

The iconic image of Che Guevara

The Che image was made on March 5, 1960, at a funeral service for the 136 people who were killed when a French ship carrying arms to Havana was sabotaged and blown-up. Crowds filled the street of Havana, and Alberto Korda was there working for the newspaper Revolución. As Castro’s funeral oration droned on Korda approached the speakers’ platform. With Castro were other leaders of the revolution, the French writers Jean-Paul Sartre and Simone de Beauvoir, and, of course, Che. When Korda got close to the platform, he noticed that Che — who had been standing in the back of the stage — had moved forward.

«I remember his staring over the crowd on 23rd street,» Korda says. Staring up, he was struck by Guevara’s expression which he says showed, «absolute implacability,» as well as anger and pain. Korda was shooting a Leica M2 loaded with Plus-X film and had a 90mm Leica telephoto lens mounted on it. He managed to take just two frames — one vertical and one horizontal — before Che stepped away. 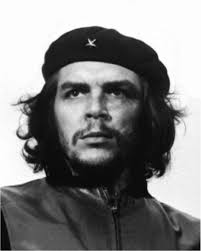