The photograph at the right of Marines raising the American flag at the summit of Mt. Suribachi during the battle for Iwo Jima has become an enduring image of bravery and heroism. However, this was actually the second flag raised on the mountain’s summit that day. The first flag-raising occurred a couple of hours earlier – shortly after Marines had gained the top of the mountain after hard fighting. This flag was deemed too small to be easily seen from the base of the mountain so a second, larger flag was raised.

Photographer Joe Rosenthal admitted that when he took a shot of five Marines and one Navy corpsman raising the U.S. flag on Iwo Jima’s Mt. Suribachi on 23 February 1945, he had no idea that he had captured something extraordinary. He was setting up for a different shot when he spotted the group of men planting the flag and quickly took a snap without even looking through the viewfinder. The chance photo would become iconic overnight and go on to win the Pulitzer Prize. 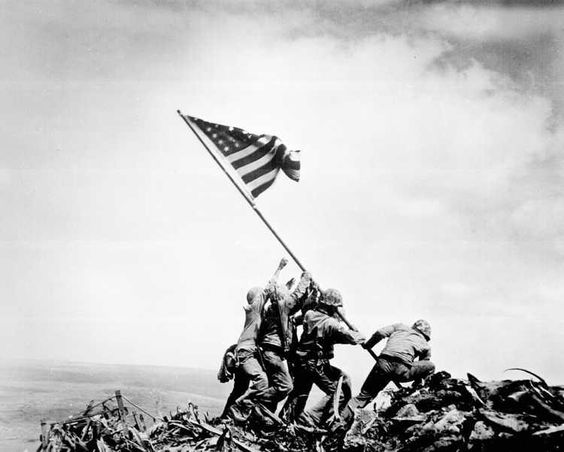