Ostensibly set during the Korean War but actually about the controversial battle that was raging in Vietnam, Robert Altman’s MASH is one of the most subversive, and funniest, antiwar films ever to come from a Hollywood studio. The performances have a lot to do with the movie’s success. Elliott Gould and Donald Sutherland are two genuinely funny actors; they don’t have to make themselves ridiculous to get a laugh. They’re funny because their humor comes so directly from their personalities.

Kansas City native Robert Altman (1925-2006) was not quite 17 when the United States entered World War II. He served for three years before returning to civilian life. He directed industrial shorts in his hometown before going to Hollywood, where he directed episodes of Combat!, Bonanza, The Millionaire, and U.S. Marshal through the late 1950s and into the ’60s. He was 45 when he made his breakthrough film, MASH, a comedy that had been offered to a dozen other directors before Twentieth Century Fox gave it to him. It instantly put Altman into the ranks of respected filmmakers

With Fox executives distracted by production on two other, bigger budget war films, Patton and Tora! Tora! Tora!, Altman was given free rein to make MASH exactly the way he wanted. MASH was nominated for five Oscars. It won for screenplay. The film also won the Golden Globe for best comedy, as well as the Palme d’Or at the 1970 Cannes Film Festival. 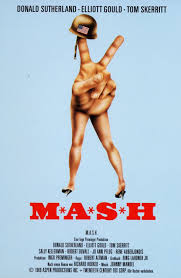