“That book (Bible), Sir, is the Rock upon which our republic rests.» -Andrew Jackson

A popular and populist figure, Jackson could not have been more different from the distinguished intellectuals who preceded him. Born in the backwoods of Carolina, he received scant education; fought in the Revolutionary War as a 13-year-old; he later fought in the war of 1812, and became famous as the general who administered the final crushing defeat to the British at New Orleans in 1815. He added to his reputation for boldness by invading Florida in pursuit of the war against the Seminole Indians in 1817-1818.

He ran unsuccessfully for the presidency in 1824 and spent most of the next four years preparing his campaign for 1828. The election was the dirtiest that US had yet seen, but Jackson ended up winning comfortably. He was the first man from outside the original 13 colonies to become president,

Before he became president, Jackson married a woman named Rachel Donelson in 1791. Rachel believed that she had been legally divorced after a failed first marriage. However, this was not accurate and after the wedding, her first husband charged Rachel with adultery. Jackson then had to wait until 1794 when he could finally, legally marry Rachel. This event was dragged into the election of 1828 causing the pair much distress. In fact, Rachel passed away two months before he took office and Jackson blamed her death on these personal attacks.

Jackson supported the state of Georgia being allowed to force Indians from their land to reservations in the West. He used the Indian Removal Act that had been passed in 1830 to force them to move. This led directly to the Trail of Tears where from 1838-39, US troops led over 15,000 Cherokees from Georgia to reservations in Oklahoma. It is estimated that about 4,000 Native Americans died due to this march. 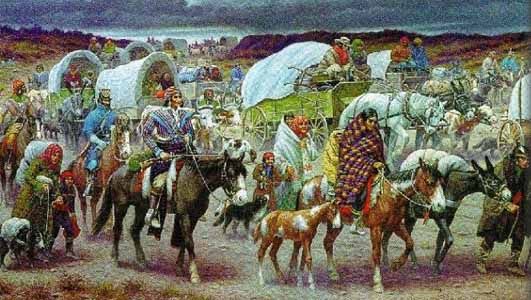 Despite his years in office, Jackson never shook off his reputation as a coarse, violent-tempered man. But the reputation did no harm to his popularity. After his second term, he retired to the Hermitage, a mansion he had built near Nashville, Tennessee. His health deteriorated painfully, and he died there in June 1845, surrounded by family and friends.