“I don’t try to guess what a million people will like. It’s hard enough to know what I like,” -John Huston

The Man Who Would Be King was a dream project for Huston. He had tried to put together a version of the movie as far back as the 1950. His original choices for leads were Clark Gable and Humphrey Bogart. That was the royalty of the earlier film generation. When he finally did get to put the story in front of the cameras it was to feature the royalty of the next generation of movie stars. While other names had been mentioned, someone (likely Paul Newman who turned down the film) suggested that Huston stick to using British actors.

Both Michael Caine and Sean Connery turned out to be perfected as the arrogant, snobbish and slightly strange British imperialists and complemented each other perfectly. The film was a throwback to the adventures of yesteryear and consequently a bit of an oddity at a time when Hollywood was breaking with much of its past. An epic and often hilarious and thrilling adventure, The Man Who Would Be King ended up being nominated for four Oscars (Best Adapted Screenplay, Editing, Art Direction and Costumes) and is a must-see film for lovers of grand old school adventure. 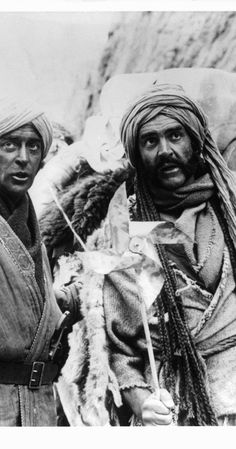