Brassaï: The Eye of Paris

“My ambition has always been to show the everyday city as if we were discovering it for the first time.”

Brassaï (pseudonym of Gyula Halász) was born in Hungary and came to Paris in 1924, working first as a journalist and then embracing photography, but it was the Paris of the 1930s that came to form the bedrock of his work. Walking the city streets at night, Brassaï discovered a previously unseen world and captured it on camera. He shows us every face and every facet, from tough guys and showgirls to prostitutes and pleasure-seekers, from the bustling cafés and dance halls to the stillness of deserted streets and mist-shrouded monuments. Through his eyes, Paris becomes a world of shadows, in which light, the prerequisite for any photograph, is reduced to dimly lit windows, streetlamps in the fog, or reflections on a rain-soaked pavement.

“I invent nothing, I imagine everything,” Brassaï once said, explaining that what he depicted was never false, it was just part of the way he saw the world. With this in mind, his pictures become more admirable than mere documents, and more complicated than photographs that set out to be art. Brassaï found a way of filtering through a camera the images he had in his head. He did not just photograph what was there, he mixed what was there with his own, subjective, love-struck gaze. Late in life, Brassaï was asked why he had taken up photography, since he had held the medium in such low regard before. He replied that he needed an immediate way to record what he had seen in his “nocturnal wanderings”. He had walked the streets of Paris for six years before he took a single photo and, he said, “I could no longer hold the pictures in me.» 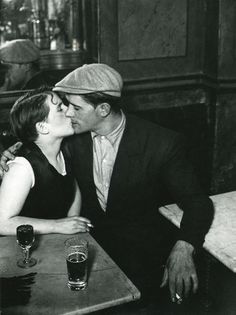