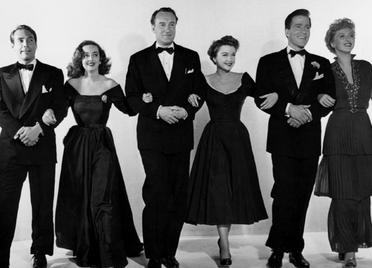 Bette Davis glitters as an ageing Broadway star who is flattered by a young acolyte (Anne Baxter), only to find the girl is a cuckoo in the nest. Joseph L Mankiewicz, the writer/director, has a nose for the nuances of female betrayal. Critically praised and commercially successful at the time of its release, it has endured as a classic of American cinema. It was nominated for fourteen Academy Awards and won six, including Best Picture. Of particular note was the fact that it received four female acting nominations, cementing Mankiewicz’s reputation as a brilliant writer of complex, multi-dimensional roles for women.

Two of the greatest films in the history of Hollywood were released in the same year – All About Eve and Sunset Blvd. And they had much more in common than timing.

They both poked into the darker corners of showbusiness, exposing its inherent ageism, especially when it comes to female stars. Both featured startling performances from «older» actresses: Bette Davis playing a 40-year-old whose career is on the wane, Gloria Swanson a positively geriatric 50-year-old whose glory days are decades behind her.

Both were nominated for the best-actress Oscar, and, of the two, Davis should have won (Swanson’s histrionics were slightly too cartoonish); in fact, the award went to Judy Holliday for Born Yesterday.