Napoleon is a fascinating subject. The man was a tyrant, a genius, a liberator and a conqueror. What you’d call a bundle of contradictions. He rose from the chaos that followed the 1789 revolution to rule France from 1799 to 1815, minus an interlude on the island of Elba. In the process, he forged a spectacular personal myth. Napoleon Bonaparte was born in Corsica in 1769 into a family that was wealthy only by local standards. He found his way in the army, graduating from the Ecole Militaire in Paris (1785) and finding a commission as an artillery officer. He spent several years fighting in Corsica. In 1793, he serves well for the French Army at the Siege of Toulon. For this, he is promoted to brigadier general.

When revolution engulfed France, Napoleon’s genius as a soldier and his reputation as a writer of political essays and pamphlets ensured that his rise continued. Infamously, he cleared the streets of Paris by firing grapeshot at rebels. He led armies into Italy and Egypt, emerging with a string of spectacular successes and a personal reputation for unequalled military genius. He was dictator of France by 1799. In 1804, he crowned himself Emperor, with his wife, Josephine, alongside him as Empress. The cult of Napoleon was born while the man himself was barely out of his twenties.

By the year 1808 France had achieved domination over the great majority of continental Europe. Through victories at Ulm (1805), Austerlitz (1805), Jena-Auerstädt (1806) and Friedland (1807) her armies had successively eliminated Austria, Prussia and Russia as military opponents. Britain alone had withstood the power of France, achieving security against invasion through Nelson’s victory over the combined French and Spanish fleets at Trafalgar (1805).

The tide began to turn in 1808 when Napoleon created a new enemy by usurping the Spanish throne in favour of his brother Joseph. The Spanish uprising that followed encouraged Britain to send an expeditionary force to the Iberian Peninsula. Costly French defeats over the next five years drained French military resources. Napoleon’s invasion of Russia in 1812 resulted in a disastrous retreat. In March 1814, Paris fell. Napoleon abdicates his rule and Louis XVIII, a Bourbon, is restored to the French throne. He agrees to exile in Elba.

In March 1815, after escaping from Elba, Napoleon goes back to France to try and take control of the army and the government again.

The Battle of Waterloo (18 June 1815) was fought thirteen kilometres south of Brussels between the French, under the command of Napoleon Bonaparte, and the Allied armies commanded by the Duke of Wellington from Britain and General Blücher from Prussia. The French defeat at Waterloo drew to a close 23 years of war beginning with the French Revolutionary wars in 1792 and continuing with the Napoleonic Wars from 1803. There was a brief eleven-month respite when Napoleon was forced to abdicate, exiled to the island of Elba. However, the unpopularity of Louis XVIII and the economic and social instability of France motivated him to return to Paris in March 1815. The Allies soon declared war once again. Napoleon‘s final defeat at Waterloo marked the end of the Emperor’s final bid for power, the so-called ‘100 Days’, and the final chapter in his remarkable career. He was exiled to the island of St Helena where he died in 1821. 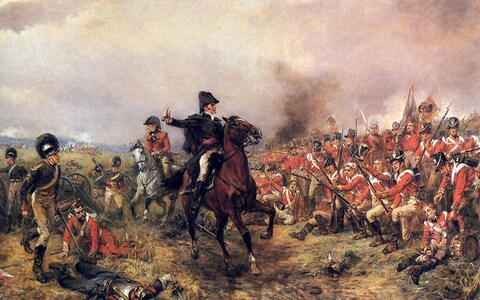