Realism emerged in the aftermath of the Revolution of 1848 that overturned the monarchy of Louis-Philippe and developed during the period of the Second Empire under Napoleon III. Realism believed in the ideology of objective reality and revolted against the exaggerated emotionalism of the romantic movement. In keeping with Gustave Courbet’s statement in 1861 that “painting is an essentially concrete art and can only consist in the representation of real and existing things,”

Jules Adolphe Aimé Louis Breton was from a rural region in the north western part of France. After receiving initial art instruction locally, he enrolled in the Paris School of Fine Arts in 1847. He painted many historical pictures there, some of which were shown at the Salon starting in 1849. However, he turned away from this classical path, back to the world of his childhood.

Breton was essentially a painter of rustic life. He concentrated on the role of women in the rural environment. His subjects may be divided generally into three classes: labour, rest and religious festivals. He was extremely popular in his own time. However, Breton’s work became eclipsed by the avant-garde movements of the twentieth century, and he was eventually forgotten.

In addition to being a painter, Jules Breton was also a recognized writer who published a volume of poems and several editions of prose related to his life as an artist or to the lives of other artists that he personally knew.

Returning from the Fields, 1871 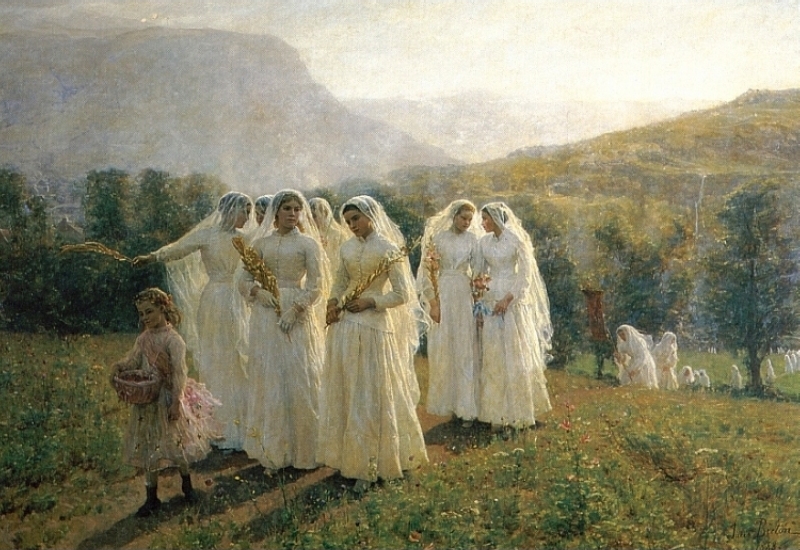